What Does it Feel Like to Have Bipolar Disorder?

Bipolar disorder is a medical condition that is easy to misunderstand. It can be challenging to live with bipolar disorder, but receiving a diagnosis shouldn’t make someone feel that their life is over. People can, and do, live normal, healthy lives after being diagnosed with any of the four forms of bipolar disorder. They just have struggles that are different from what most people experience.
Because many people don’t understand mental illness, its signs and symptoms can often go untreated. Some can mistake it for normal emotional variation or shrug it off as merely stronger-than-normal mood swings.
The cause of bipolar disorder isn’t fully understood. Researchers do know that it involves changes in the brain that cause severe, sometimes long-lasting mood, energy, motivation, and behavioral swings. Dramatic shifts in behavior and erratic actions often characterize bipolar disorder, but not always. Without treatment or therapy, bipolar disorder can become worse over time.
Those who suspect that they may have bipolar disorder should always speak with a medical professional. Only a licensed mental health expert can make a diagnosis. 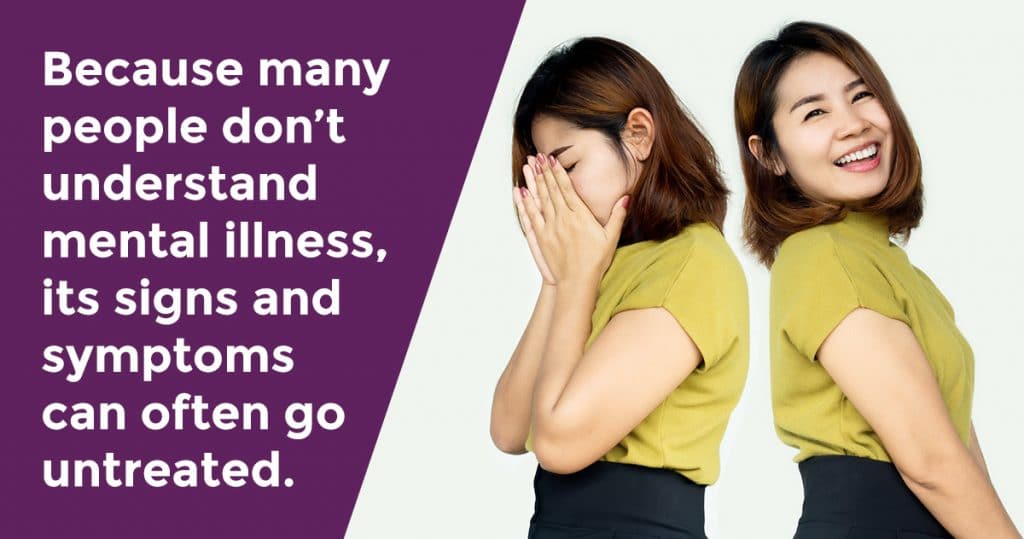 What Forms Can Bipolar Disorder Take?

This is the most extreme manifestation of the condition. It often includes manic periods of at least seven days, or are severe enough to need an immediate hospital trip. Manic periods come with heightened energy, sleeping very little, and may come with extreme irritation.
Major depression episodes alternate with mania and usually last for at least two weeks at a time. Mixed episodes can also occur, where negative thoughts and feelings exist alongside the energy to act upon them. Mixed episodes are the most dangerous aspect of Bipolar disorder and are the most likely to result in a successful suicide attempt.

Someone diagnosed with Bipolar II generally experiences a less severe form than Bipolar I. People with this condition have episodes of depression and less extreme, hypomanic episodes that don’t qualify as full-on mania. The symptoms can still affect everyday life for the worse.

Those with cyclothymic disorder experience multiple episodes of mania and depression symptoms that last for at least two years. Cyclothymia doesn’t meet the criteria of hypomanic or depressive episodes. It is a less severe form of bipolar disorder than types I or II.

Bipolar Disorder – “Other Specified” or “Unspecified”

People diagnosed with this version of bipolar have symptoms that don’t fit into the other type categories. Still, they can experience wild shifts in mood and energy levels. While not as intense as other levels, these changes still affect how day-to-day life for the worse.

What Are the Risk Factors for Bipolar Disorder?

While the origins of this disorder aren’t fully understood, certain environmental factors can contribute. Bipolar is usually diagnosed in the late teens or early 20s, though it sometimes appears in early childhood. Bipolar disorder can manifest during pregnancy or the after childbirth for some women.
If a family member has or had bipolar, you might be more likely to be afflicted. Drug and alcohol abuse can trigger the onset of these symptoms but are not the ultimate cause. Other types of mental disorders (such as anxiety disorders, ADHD, and others) can add to the likelihood of developing bipolar disorder.
Some researchers theorize that there is a genetic component, but this has not been proven. Eating right, getting exercise, and getting therapy might help lessen your symptoms. People with mental health conditions benefit from a family therapist and/or a support group.
Bipolar is usually treated with some combination of antidepressants and mood stabilizers, therapy, and a solid support network. With this kind of treatment plan, people who have bipolar disorder can live happy and fulfilling lives.

How Does it Feel to Have Bipolar Disorder?

It can be challenging for those who haven’t experienced it to empathize with those who suffer from it. We can certainly sympathize with anyone struggling with illness, but empathy asks us to go a bit deeper. Empathy asks us to place ourselves in someone else’s shoes, see the world the way they see it, experience life as they do, and feel emotions and sensations like them.
The person describing their feelings below does not exist. It is a fictional representation of many people’s anecdotes, combined in a way that might give you insight into how someone with bipolar feels. If it sounds like your own experience, please seek the advice of a medical professional. If it sounds like someone you know, please lovingly encourage them to seek out a medical evaluation.

I feel like a different person. I can’t sit still, and I have to be doing things all the time. I just cleaned the entire house and started a dozen projects that I’ll never finish. Idiotic things sound like great ideas right now. I think I’ll book a trip to the Bahamas– now is a great time to sun myself on the beach!
I want to buy everything right now! Ooooh, look at all the cool things on sale right now! Thousands of dollars? Bah, it’ll be fine, I’ll pay for it later. That’s what credit cards are for, right?
Let’s go out and drink tonight! I’ll buy a few rounds for everyone, no big deal! Ooooh, dancing? Sure thing! Though, that dress doesn’t make you look very good, did you know that? Ah, don’t be such a party-pooper. Let’s just have fun and let tomorrow worry about itself!
I feel my creative side exploding, driving me to write, paint, or draw for hours on end. I barely need to sleep. I’m bouncing around on top of the world, and nothing can stop me.
Until the mania ends, and the depression kicks in…Please don’t let that happen. It won’t!

I have more energy than usual. My emotions feel sharper, and I sense a spike of creativity. Sometimes, I just feel restless and irritable, pacing around with nowhere to go and no real drive to do anything.
In a mixed bout of hypomania and depression, I have the worst of both worlds: extreme self-loathing, and enough energy to act on it. I might be driven to lash out in destructive ways, hurting myself or others.
I might be physically destructive, or I might drive away my friends and family with hurtful, careless words. Mixed bouts scare me the most because when I’m deeply depressed, I can’t even crawl out of my bed. But when I have depression AND mania, I’m afraid I might actually go through with suicide.

I don’t always feel either depression or mania. I have periods of normal, stable mood, especially when I’m taking my medication like I should. Sometimes, I rely on the people around me to let me know when I’m straying from where I should be. This lets me take a breath and remember that it’s my disorder speaking, and not me.
Because I can appreciate what a normal mood is, I’m better able to recognize when I am wandering outside of it. I can take steps to limit the harm that I sometimes do when I’m feeling reckless. I work to keep my relationships strong when my mood is normal, and I apologize before and after my episodes to stop my mood swings from driving people away.
It really helps to be around people who understand that I can’t always control my behavior. It’s important to have people who can help rein me in and keep an eye on me to make sure I’m ok. It’s hard to feel out-of-control the way I sometimes do, but I cling to the good memories and keep pushing forward.

It’s hard to get out of bed, but I do it. It feels like I’m dragging myself through thick fog, or maybe wading through heavy soup. It’s difficult to concentrate on anything, and nothing seems very fun or exciting. I can hardly remember what it feels like to enjoy myself.
I look at my credit card bill. Two weeks ago, I went to the mall in my mania phase, and spent several thousand dollars. I beat myself up over it, wondering how I could have been so stupid. Why didn’t I stop myself?
I do insane things and I can’t seem to stop myself. My depression and mania just won’t leave me alone. I do unpredictable things and drive everyone I love away. No one is ever going to love me while I have this problem. I’m probably going to live alone forever.
Then again… that’s just the depression talking.

I can’t even get out of bed, but I don’t care. I’ve been sleeping most of each day, and I haven’t showered in over a week. I think someone just texted me, but I don’t even look at my phone. They probably want me to go out with them, and I don’t want to see anyone right now. Maybe not ever. And they probably hate me, anyway.
My last period of mania is a distant memory. What does it feel like to have energy or motivation? Is that my mom trying to call? What does SHE want?? She’s probably just going to tell me that I should get out of bed. Deep down, I know she’s right, but I just can’t make myself move right now.
Maybe if I go back to sleep a little longer… but then, I’ll just have to wake up again later. It would be nice if I never had to wake up again. Then all this pain would just go away.

If you or someone you know has symptoms of bipolar disorder, please seek professional advice from a mental health expert. Don’t give up. There are people out there, just waiting to help.

Previous post: Am I Depressed or Am I Just Sad?